I am writing this in Saturday while the wife is a purse party -
Since MLB The Show comes out tomorrow - I realize I will need to get a few of these queued up so I can spend my time in front of the TV. Also have my first fantasy draft here at the house on Saturday (a live draft beats the shit out of computer). Now that I have my justification for not doing something social - here are some new cards made to look like old ones!
Ozzie's Aces - Mark Buerhle and Jake Peavy
Oakland A's Team Card
2009 AL Batting Champs - Mauer, Ichiro, Jeter, Cabrera
Steve over at White Sox Cards must be looking forward to having a rotation fronted by these 2 hurlers. I thought it was a classy move earlier in spring when Peavy said that Buerhle should be the opening day guy. It's that kind of selflessness than can make you a clubhouse hero. Onto the leaders card - can you imagine if the top four of your lineup went like so
1 - Ichiro
2 - Jeter
3 - Mauer
4- Cabrera
Wow - that lineup would easily the best top 4 ever put together - I know it would never happen, but still kinda neat to think about.

Next we have a 2 dudes and 2 cups - gold cups - and our first double - I've heard a lot of mix feelings about Nolan Reimold from some birds fans - some seem to think he's going to be a stalwart in the outfield while others seem to think he's really just a 4th outfielder at best - what do you O's fans out here think? 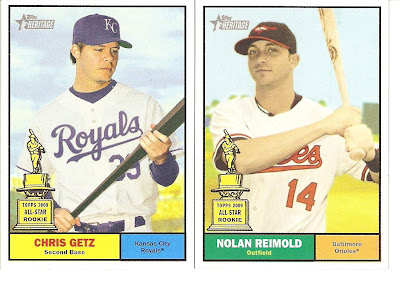 Josh Beckett
Tim Wakefield
Michael Brantley
It's safe to say the Red Sox have 3 aces in the form of Beckett, Lacey, Lester - a healthy Dice -K ain't so bad either. I wonder if Wakefield is going to be the long man this year since Bucholz seems to be ready to be a part of a MLB rotation.

Here is Curtis Granderson again, this time in the form of a Chrome Refractor #'d 104/561 - any one of you ever send out a chrome card for a TTM? How did they turn out? I know that Curtis is a pretty prolific TTM signer so I am tempted to try him out. 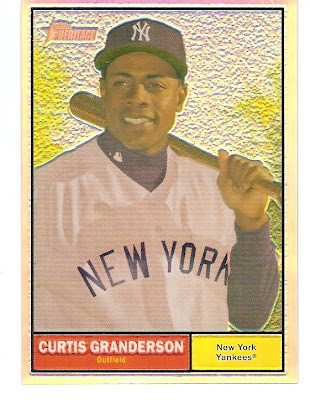 By the way - thanks to the Cardboard Junkie for the shout out on what may end up being the longest box break ever - We will see if I have the stamina to keep going pack by pack!
Posted by steveisjewish at 6:16 PM

The Sox almost got Halladay too. Still, I am really looking forward to seeing the ChiSox starting pitching in action this season!