Good afternoon - ahem - morning - Sorry for another absence - the flu just killed me last week and then when I felt better, had many other things that needed to be done. I should be able to focus more time here in the near future - I am appox 6000 cards away from being 100% organized and filed - so that big project is almost done!
Anyway - grabbed 2 boxes of the 2010 Heritage and just to get this started Here are the box toppers and buy back card I got.
I've seen a few places where these stamp sheets were called boring - while they are not super exciting, I feel they make for an interesting piece to try to get some TTM autos going. Even if you do not want a Sizemore or Choo auto - really any Indian would work - Something I might have to look into. I didn't scan the back, but it is pretty neat - Has a list of where they played in 1961 and then a career list of all hitting and pitching records for the team. I like.

Next topper has a Met on it, Mr. John Maine (who was recently dubbed the fastest ((or one of)) talkers in major league baseball). Next up is Mat Latos who I am trying to trade for daily in my dynasty league but I cannot get Chuck to let him go - one of these days - I really don't understand how Yovani Gallardo is not enough for Brad Lidge and Mat Latos - fucker. Finally there is Jackie Robinson who was the first African American to get a seat at Denny's.

I was happy to get a buy back card - don't really know what I am going to do with it yet though - I bring you Eddie Bressoud who (and I did not research this anymore than turning the card over) had a very average career. Stuck around for a few seasons playing at what appears to be replacement level. Good for him. 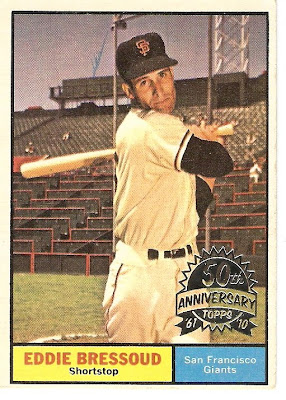 Here is the proof of mediocre stats. 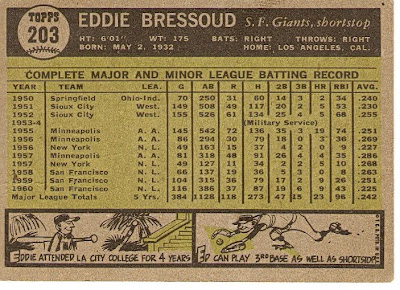 There was still something really cool back here that I have not seen on a card before and bet was pretty common back in the days of war - Eddie sat out 1953-1954 for military service. Good on you Eddie - both of my bros are veterans - (I couldn't hack it) so its pretty sweet to see.

Posted by steveisjewish at 10:14 AM

I have to agree with you about to stamp box toppers - they will make good TTM items if nothing else. Regardless, I think Heritage is better then ever this year if for no other reason then I love the '61 Topps design.