Keeping up with the Heritage - still got a ways to go - but at least for those of you who choose not to collect this set you are getting to see most of it!
Beast of the East - Josh Beckett and Johan Santana
Carl Crawford
Russel Martin
Between Beckett and Johan I think I would have to take Johan - of course I am skewed being a Mets fan and all, I have just never been a big Josh Beckett fan although he has done nothing to deserve that. Carl Crawford finally had that superstar season last year and there is lots of talk that the Mets are going to push real hard to get him on the team next year - a 1 2 of Reyes then Crawford would really be pretty insane. Finally we have Russel Martin who is looking to rebound from a lost season last year. 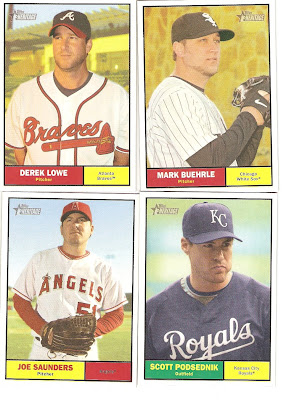 Finally we have a card commemorizing Justin Morneau's 2006 MVP year - he helped me win my first ever fantasy baseball league that year, so I have always been greateful. 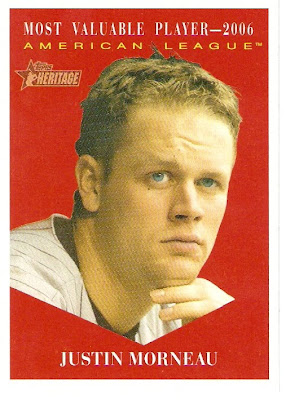 I think we will look at some more Upper Deck tomorrow.
Posted by steveisjewish at 4:00 PM